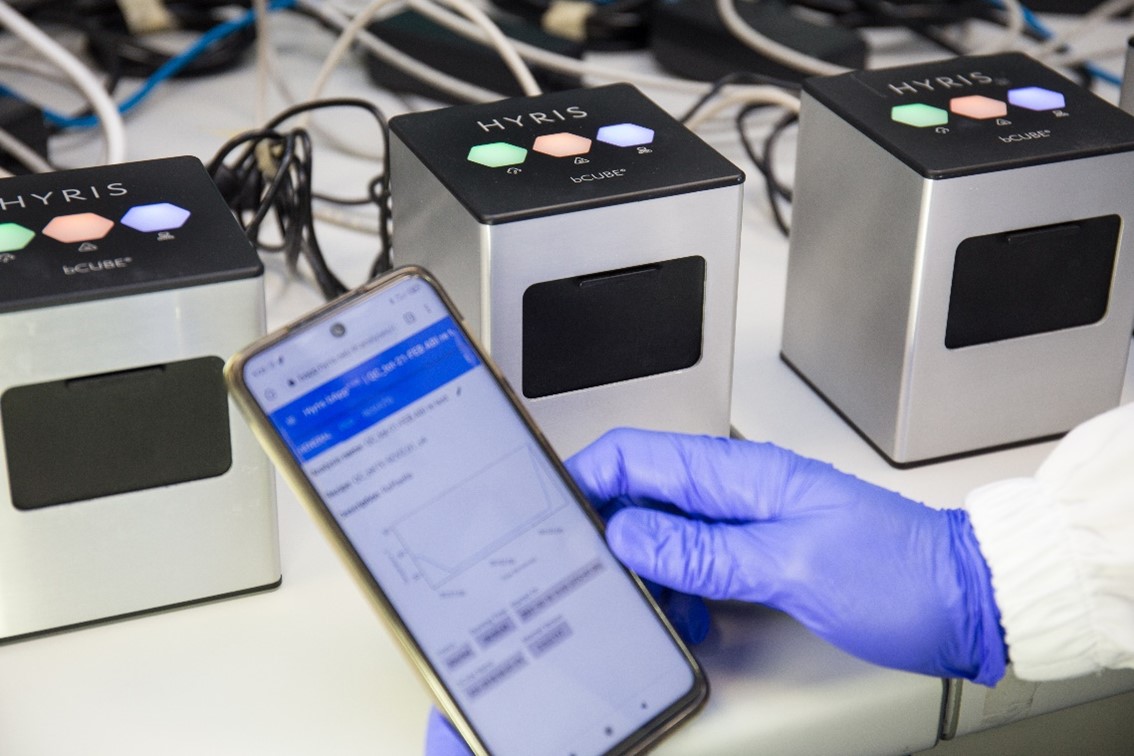 Of the 17 HYRIS bCUBE®s together with all the required HYRIS bKIT®s, bought by the Committee so far, eight has been deployed at the Canadian Sport Institute in Calgary to test athletes and team members on the opening day of the Tim Hortons Brier, to get the men on the ice that very night.

Before adopting the HYRIS SYSTEM™, molecular tests by the NHL's lab for its playoff bubble and by Hockey Canada for the world junior men's championship in Edmonton could take about 24 hours to process. The curlers underwent that type of test 72 hours before departing for Calgary and upon arrival; after a 24-hour quarantine in their individual hotel rooms awaiting results, they were let out only to get on the ice and train before returning to their rooms. The whole procedure, as well as a complicated undertaking, is also a very expensive business.

"If we had to rely on the PCR test, we would have had to bring in the players a day earlier to have everybody ready to curl Friday night," Curling Canada event operations director Danny Lamoureux said in an interview to Prince George Citizen ."For us, one day [before the match, Ed.] is $10,000 (for the field) in a hotel room."

But even greater concerns are for the athletes, as these quarantines are very tiring and unnerving to them, to the point that this could harm their performance on the field.

"The sooner I can get them out of quarantine, the happier they are," Continues director Lamoreux.

A second negative test, required to allow athletes to mix with teammates before the start of the event, would have posed a time crunch if not for the HYRIS SYSTEM™ quick-turnaround capabilities.

Using a Point of Care diagnostic solution such as the HYRIS SYSTEM™, the teams have been able to get results within three hours, on average. CSI Calgary staff have been trained to analyze the results in-house, thanks to the portability of the HYRIS bCUBE™, the technological jewel at the core of the HYRIS SYSTEM™, a miniaturized testing unit the size of a tissue box. With such an improvement, it comes to no surprise that this new approach to diagnostic monitoring significantly reduced the amount of time Brier participants spent alone in their hotel rooms, awaiting a test result to start curling.

"Doing it this way was economical, and we didn't have to put the players through an extra day of hard quarantine." So said Lamoreux. Including the Canadian women's championship that kicked off Calgary's curing bubble in February, Lamoureux confirmed no one has been tested positive for the virus so far.

COC chief sport officer Eric Myles said that the money used to buy the HYRIS bCUBE®s and all the other components needed to operate the Hyris System® came from the $5 million the federal government gave to the high-performance sport last year to cover the extra costs of returning to training and competition in a pandemic.

The HYRIS bCUBE®'s portability truly makes the Hyris System® an asset, especially in a country as geographically vast as Canada. The outcomes of adopting the Hyris System® have been stretching way further than the world of curling, embracing some of the most important sectors of the Canadian sporting world. In the previous months, more units of the Hyris System® has been used to test:

The Hyris System® units have been based in a Victoria warehouse from which OTP director of sport science, research, and innovation Dr. Andy Van Neutegem distributes based on need.

"Testing is just one virus-avoidance tool in a sports environment, but it is a foundational one." Van Neutegem explained, "[...] to know the veracity and efficacy of your interventions, you have to do testing."

Contact us to understand how we can support the world of sport throughout this critical time.

This email address is being protected from spambots. You need JavaScript enabled to view it.

Subscribe our newsletter for periodical updates about our technologies